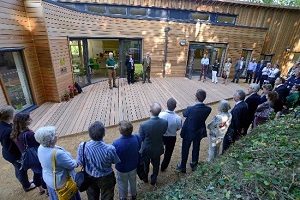 During 2009 and 2010 Martin Cooke worked with Dorset County Council and the National Trust to develop a project to provide new interpretation and visitor facilities for people coming to Hardy’s Cottage near Dorchester and the adjacent Thorncombe Wood.

Thomas Hardy was born in 1840 in a traditional cob and thatch cottage at Higher Bockhampton, he lived in the cottage until he was thirty two and wrote two of his most well known novels there, ‘Under the Greenwood Tree’ and ‘Far from the Madding Crowd’. His writing throughout his life was inspired by the landscape and people within it and it is this connection that this project sought to bring to life.

New visitor facilities together with improved interpretation, access and a range of new activities have been provided.

A Heritage Lottery Fund round 1 bid was awarded in December 2010 after assistance from H&L. Further work was undertaken on the round 2 application including audience research, business planning, fundraising and a general expert advisor role. The bid received an HLF round 2 pass in December 2012 for £495,000. Work on the implementation of the project began in January 2013 with the official opening in September 2014.